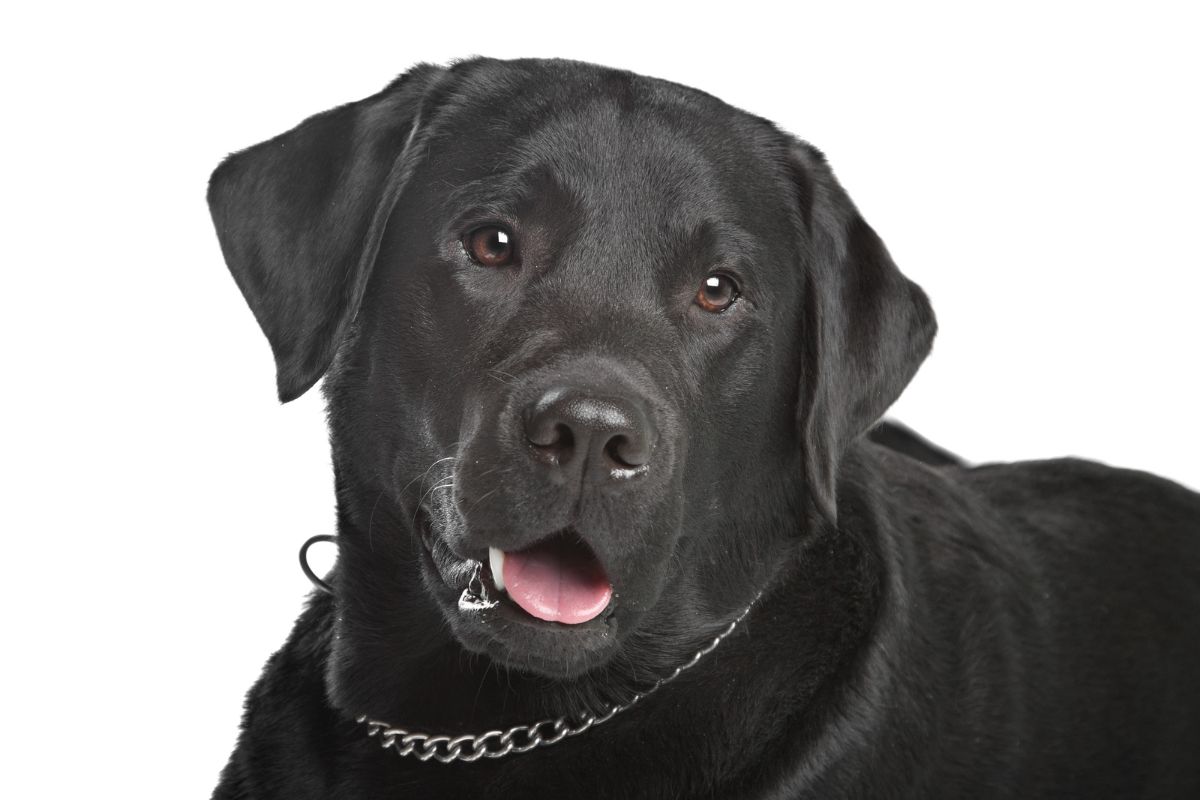 Your dog is throwing up undigested food because he’s expelling a foreign object, vomiting, eating too much or too fast, or is overly excited. He might also have an esophageal condition, throat cancer, or rabies. Poisoning can also cause regurgitation.

Read further for an in-depth explanation of why your dog could be throwing up undigested food. This article will also discuss what you can do to help relieve your dog’s symptoms.

Throwing up undigested food is known as regurgitation. It’s different from vomiting because the food has not yet entered the stomach and is still in the esophagus (food pipe). The regurgitated food can contain saliva and look similar to how you presented it to your dog. It might look a little mushy if he has chewed it well.

When dogs regurgitate, it often happens suddenly and sounds like a burp. Sometimes, the larynx (or voice box) doesn’t have time to close and protect the dog’s airway, and the regurgitated food can enter the trachea or windpipe and cause aspiration pneumonia.

Your Dog Is Expelling a Foreign Object

If you’ve owned a dog for even a short while, you’ll know that they’re notorious for exploring interesting objects through taste.

Your dog might have been carrying around a small object in their mouth and decided to have a snack as well. Or, they could have had something in their mouth when you called them for dinner and didn’t think to expel the object out of excitement.

After eating for a few seconds, your dog could have accidentally swallowed the foreign object. Their esophagus would react by contracting the muscles surrounding it to expel the object and anything else in it.

If you notice a strange object in the undigested food, this could be why.

Your Dog Is Eating Excessively

Everyone knows that dogs love food, and you might feel that you’re spoiling your dog by feeding them extra snacks or more than the recommended amount for their age and breed.

Most dogs, unfortunately, will simply eat until the food is finished, and they might not notice that their stomachs are full yet.

If you feed your dog excessive amounts, they could throw up some undigested food as their stomach won’t allow it to enter toward the end of the meal. Thankfully, you can solve this problem quickly by feeding your dog less!

Your Dog Is Excited

Another common canine trait is being excited at mealtimes. This happens more commonly with younger dogs and puppies, and their over-excitement can cause them to eat and drink too fast and throw up undigested food.

If you think this might be the problem, try to calm your dog down just before mealtimes. Having them lie down next to you and petting them can make them feel calm. When your dog seems relaxed enough, slowly introduce the meal to prevent them from getting all excited again.

Alternatively, you could try a slow-feeder (or anti-gulp) bowl to encourage them to eat slower. Doing this can reduce the likelihood of your dog regurgitating undigested food.

Your Dog Is Stressed

Stress can also cause dogs to become overly anxious at mealtimes and throw up undigested food.

If you have more than one dog and they share a food bowl, your dog might feel stressed as they’re competing with the other dogs to ensure that they get his fair share of the food. An easy fix for this is getting each dog their own food bowl and spacing them apart.

Other causes of stress include introducing or losing a family member or pet, being away from home, or separation anxiety.

Your Dog Has an Esophageal Condition

Your dog throwing up undigested food could be due to an esophageal condition. This is a more severe cause of regurgitation, and you should consult your vet as soon as possible if you think that this is the cause.

Esophageal conditions are often accompanied by other symptoms like difficulty swallowing, weight loss, and drooling.

Below are some common esophageal conditions in dogs:

Megaesophagus causes a dog’s esophagus to enlarge. It would seem logical that a dilated esophagus would allow food to pass to the stomach more quickly. Still, this condition is caused by the esophageal muscles failing and not gently contracting to move the food.

Food can become dislodged in the esophagus, but it may spontaneously propel out of your dog’s mouth.

Myasthenia gravis, a severe neuromuscular disease, can often cause a dilated esophagus, so it’s best to get your dog veterinary attention as soon as possible.

If your dog has acid reflux, stomach acid can irritate the esophagus’s lining, causing it to become red and inflamed. This can make it painful for your dog to swallow food, and the esophagus might not be able to handle a normal amount of food traveling down to the stomach.

Cricopharyngeal achalasia is a swallowing disorder that prevents the food from moving from the throat (or pharynx), and into the esophagus. Thankfully, it’s a rare canine condition, but you should be alert if your dog is a springer or cocker spaniel, as it is more prevalent in these breeds.

Vets aren’t sure exactly what causes esophageal dysmotility, but it can happen when your dog has been injured in the throat area or if the esophagus has recently been inflamed.

Like megaesophagus, esophageal dysmotility affects the muscles in the windpipe, and it can prevent the food from passing into the stomach effectively, causing your dog to regurgitate undigested food.

Your dog might have esophageal stricture if he has recently chewed a toy and a piece has broken off and injured his esophagus. He may have also swallowed a sharp object that damaged the esophageal lining.

Esophagitis is the inflammation of the esophagus caused by the backflow of the stomach acid into the food pipe. This most often happens if your dog has GERD (gastroesophageal reflux disorder).

Signs that your dog might have esophagitis or GERD include:

If your vet suspects that your dog has GERD, they’ll most likely ask you to change your dog’s diet.

Esophageal cancer is, thankfully, rare in dogs. Still, if your dog has this condition, there may be a malignant tumor in the windpipe obstructing it, causing your dog to regurgitate his undigested food.

If you have ruled out the other possible esophageal conditions mentioned above yet your dog is still regurgitating food, it may be best to visit a veterinarian and get a thorough checkup. It can help you detect the condition earlier and have higher chances of treating it.

Your Dog Is Vomiting

Vomiting can cause your dog to throw up undigested food. When dogs vomit, bile moves from the stomach or small intestine and into the esophagus. The dog’s abdomen contracts simultaneously, causing the stomach contents (and anything that’s been recently consumed and undigested) to be vomited out.

However, vomiting rarely causes dogs to throw up undigested food because it’s usually accompanied by nausea, causing your dog to be reluctant to eat.

Your Dog Has Rabies

Rabies is a fatal disease for dogs, making rabies vaccinations crucial for your canine companions. If your dog hasn’t had a rabies vaccination and contracts the disease, one of the symptoms could be throwing up undigested food.

Sadly, there’s no cure once your dog has rabies, so you should always ensure that his rabies vaccination is up to date.

Your Dog Has Throat Cancer

Throat cancer in dogs can present with one or more tumors in the throat. As the tumor grows, it can put pressure on the esophagus and make swallowing and eating painful and difficult for your dog. One of the symptoms of canine throat cancer is regurgitating undigested food.

Your Dog Has Been Poisoned

Dogs are naturally curious animals and love exploring new objects. Unfortunately, they can sometimes ingest things they shouldn’t, which can sometimes be poisonous.

Vomiting is a common sign of poisoning in dogs, but throwing up undigested food could also indicate it. If you think your dog’s been poisoned, you should immediately take him to the vet.

What’s the Outlook for Dogs Throwing Up Undigested Food?

Now that you know about the possible causes of dogs throwing up undigested food, what’s the outlook if this is happening to your dog?

The outlook for dogs throwing up undigested food is usually optimistic as long as you seek veterinary care as soon as possible. If your dog was regurgitating food due to eating too fast or being overly excited, the outlook is bright once you stop such behaviors.

The outlook is optimistic because most conditions can be easily treated if they’re detected early enough.

What Should I Do if My Dog Throws Up Undigested Food?

It’s never easy watching your dog vomit or regurgitate but is there anything you can do to help them?

If your dog throws up undigested food, you should monitor them closely, observe the regurgitated food, and try and pinpoint the cause. This information may help your vet provide an accurate diagnosis and a suitable course of treatment.

As disgusting as it may sound, take a close look at the regurgitated food and note if it contains a lot of saliva, mucus, foreign objects, or blood. It’s important to relay this information to your vet, and if you think you’ll forget, take a photo of it before cleaning it up.

As always, give your dog plenty of love and attention as they might not be feeling well.

Is Regurgitating More Serious Than Vomiting?

When your dog regurgitates, it can seem unnatural and worrying, while vomiting seems more common and benign. So, which one is more serious – regurgitating or vomiting?

Regurgitating and vomiting among dogs can be equally serious depending on the cause. Both can have severe and benign causes, and it’s essential to monitor your dog closely and take them to the vet if the vomiting or regurgitation doesn’t stop.

Dogs can vomit for various reasons, and these include the following:

If your dog is vomiting, it could be serious when it’s accompanied by any of the following symptoms:

There are many reasons a dog might throw up undigested food, and your vet is always the best person to provide a final diagnosis. However, here are the main reasons:

Addressing these reasons may keep your dog from regurgitating. Don’t hesitate to seek a vet’s help for a more accurate diagnosis and a more efficient treatment.