Ketchup is arguably one of the most popular condiments found in most households today. Most people use this flavor-adding solution on almost every food, including burgers, fries, eggs, and even desserts. And since we humans are fond of sharing our meals with our canine friends, you may be wondering whether ketchup is safe for dogs; let’s find out.

Dogs can eat ketchup but in moderation. This condiment contains some ingredients that may affect your pup’s health, such as onion and garlic powder, Xanthan gum, artificial colorings, and sweeteners. So a lick or two of ketchup isn’t bad for your pup, but you shouldn’t make it a habit.

In this article, I’ll offer a detailed look at everything you need to know regarding ketchup and its consumption by dogs. So, before sharing a few fries dipped in flavorful ketchup with your pup, read this first!

Is It Safe For Dogs To Eat Ketchup?

Technically, it’s safe for dogs to eat ketchup, but as a cautious dog parent, you shouldn’t make a habit of feeding your pooch food containing ketchup. The major point of concern around this flavorful condiment is the presence of controversial ingredients that may harm your furry canine friend.

While most people believe that the only ingredient in ketchup is ripe tomatoes, it also contains significant amounts of salt, onion and garlic powder, xanthan gum (used to thicken it), xylitol (an artificial sweetener), and food coloring.

All these added ingredients aren’t the best for your dog and are likely to cause health issues such as stomach upsets, dehydration, and lethargy.

So, in a nutshell, it’s okay to give your pup an occasional ketchup treat, but be careful not to feed him large amounts more often.

When Is Ketchup Good for Dogs?

Ketchup is good for dogs only when fed in moderation. You can see that a majority of ketchup comes from ripe tomatoes when you glance at the ingredients list. While ripe tomatoes without the stems and leaves aren’t toxic to dogs, they shouldn’t form a major part of your pup’s diet.

So, ketchup will only be safe for your pup if consumed moderately.

In most cases, your pooch will still be fine after one or two licks of ketchup.

Although ketchup is made of ripe tomatoes that are rich in soluble fiber and antioxidants, it isn’t the most nutritious condiment for your pup.

Tomatoes aren’t the only ingredient, as ketchup comes as a concoction of garlic and onion powder, vinegar, salt, cinnamon, and sugar for enhanced flavor. Some store-bought ketchup also contains xylitol and xanthan gum.

These ingredients don’t have any nutritional value in your dog’s health, and in fact, an excess of their consumption has detrimental effects on your canine companion’s health. While they won’t kill your dog, they aren’t a healthy option either way.

Therefore, always check the ingredients list to know what’s getting into your pup’s digestive system. Ketchup has no nutritional benefits for your dog. 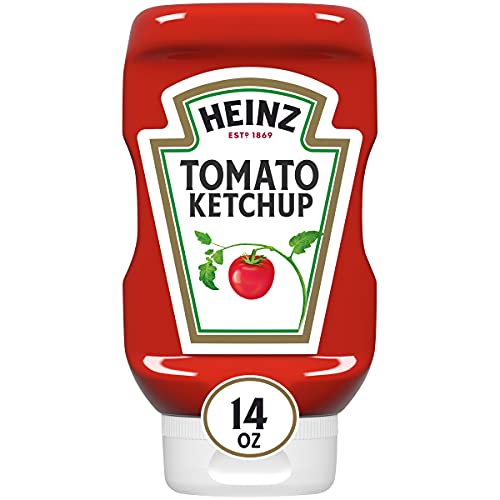 When Is Ketchup Bad for Dogs?

The first ingredient in ketchup is ripe red tomatoes, but there are other ingredients in this flavorful condiment that you should be wary of, including some that might be toxic for your dog.

However, besides tomatoes, most industrially produced ketchup also contains a bunch of other ingredients, which include:

When making ketchup, onion is used in the form of onion powder. Onion is a member of the allium family whose high intake causes allium toxicity in canines, and the adverse effects of this toxicity are damage to the red blood cells resulting in hemolytic anemia.

In fact, according to American Kennel Club (AKC), all parts of onions are toxic regardless of the form in which dogs consume them. Additionally, garlic is also a member of the allium family and has similar effects to those of onions when consumed by canines, which is equally as toxic as onions.

Besides, most commercially produced ketchup also has a high amount of salt, which causes dehydration, panting, lethargy, and frequent urination in dogs.

Xylitol, an artificial sweetener used to add flavor to this condiment, doesn’t go well with dogs.

Even a small amount can have very severe effects on your pup. Xylitol poisoning can cause seizures, hypoglycemia (low blood sugar), and liver failure in extreme cases. However, to counter these extreme side effects, look for sugar-free ketchup.

There are several natural kinds of ketchup in the market today with the “sugar-free” label.

Some manufacturers also add xanthan gum in their ketchup, which is a stabilizer that helps to thicken the solution to a uniform consistency. Xanthan gum is created from fermented sugar, making it less ideal for consumption by dogs.

It seems like every ingredient here is working against your pup’s health!

With a tiny lick of ketchup, your canine companion will probably still be okay. However, a huge intake brings along severe side effects.

The potential risks your pup is likely to suffer from following high ingestion of ketchup include:

Symptoms To Watch Out For

Here are some of the common symptoms you should watch out for if you suspect your canine friend has had a significant amount of this condiment:

What You Should Do If Your Dog Consumes Ketchup

Don’t panic if your dog has had a few licks of ketchup as he’ll probably be okay.

However, if you notice any warning signs such as persistent red urine, lethargy, diarrhea, vomiting, and seizures, you should immediately rush him to the pet clinic. But as the cautious dog parent, you should consult a qualified veterinarian anytime you suspect that your pup has consumed more ketchup than he can handle.

Q: Can Ketchup Kill My Dog?

This flavorful condiment will not kill your dog instantly. However, it can cause some serious problems that can damage his vital organs, such as the kidney, liver, and heart, if consumed more often.

Q: Can My Dog Eat Fries With Ketchup?

Fries aren’t a healthy meal for your canine friend, as they are full of fats and likely to cause obesity and heart problems. When combined with ketchup, fries become more unfit for consumption by dogs, so you should avoid giving your dog this combination of treats.

Q: Can My Dog Eat Eggs With Ketchup?

Cooked eggs are good for dogs, as they are rich in proteins and contain fat-soluble vitamins and linoleic acid, which are good for a dog’s skin and coat. So, you can sprinkle a little amount of ketchup on cooked eggs before giving them to your pup to add a touch of flavor.

However, be careful not to do this often—don’t turn it into a habit just because you see your dog enjoying ketchup eggs. Ensure you put your pup’s health first by limiting his ketchup intake regardless of how much he enjoys it.

Q: What if My Dog Swallows a Ketchup Packet?

Most dogs are fond of eating anything that comes their way, and in the course of licking a packet of ketchup, your canine companion can accidentally swallow the packet.

Here the danger and risk of harm shift from solely the condiment to its plastic packaging. If you suspect that your pup has swallowed a ketchup packet, consult a vet immediately.

In the meantime, you should closely for symptoms such as vomiting, diarrhea, and straining during defecation. If the packet goes through the dog’s digestive system, he’ll probably pass it out in his poop.

So, it’s advisable to inspect his poop to check the packet.

However, if the packet doesn’t pass out after several days, preferably 72 hours, it might indicate that the packet has probably caused a blockage in the dog’s gastrointestinal tract and will need immediate medical intervention to remove it.

So, be careful with how you dispose of your ketchup packets.

It’s okay for dogs to eat ketchup but in moderation and you should only give a small amount of ketchup to your dog on an occasional basis. Besides tomatoes, ketchup comes with a string of additional ingredients such as onion, garlic vinegar, cinnamon, xylitol, and xanthan gum, all of which aren’t your pup’s best friends.

These ingredients can cause serious side effects when your dog consumes ketchup in large quantities, such as dehydration, seizures, reddish urine, hemolytic anemia, liver damage, and hypoglycemia.

So, be careful about your dog’s intake of this favorite human condiment.

My name is Andrew, and I've been around dogs my entire life. Look at my profile picture and, you see me as a little kid with my family's two German Shepherds. That's how my life with dogs started, and ever since, I've been both living and working with dogs.

link to Can Dogs Drink Distilled Water? Let’s Find Out

Every pet owner knows dogs need to have a steady water supply, but deciding what type of water to give your dog can be a challenge. There are many options, and there are numerous contrasting claims...

Continue Reading
link to How Long Can Dogs Go Without Water? (We Ask the Experts)

Like humans, dogs' bodies are made of around 80% water. To maintain this healthy balance, dogs need to drink plenty of fresh, clean water throughout the day. Without water, dogs could experience...

We are very passionate about Dogs and love sharing everything we learn about them. Mr. Dog Food is the perfect resource for learning everything about your dog's nutritional needs.

This site is a participant in the Amazon Services LLC Associates Program, an affiliate advertising program designed to provide a means for sites to earn advertising fees by advertising and linking to Amazon.com. We are compensated for referring traffic and business to Amazon and other companies linked to on this site.