Can Dogs Eat Cornbread? (We Find Out) 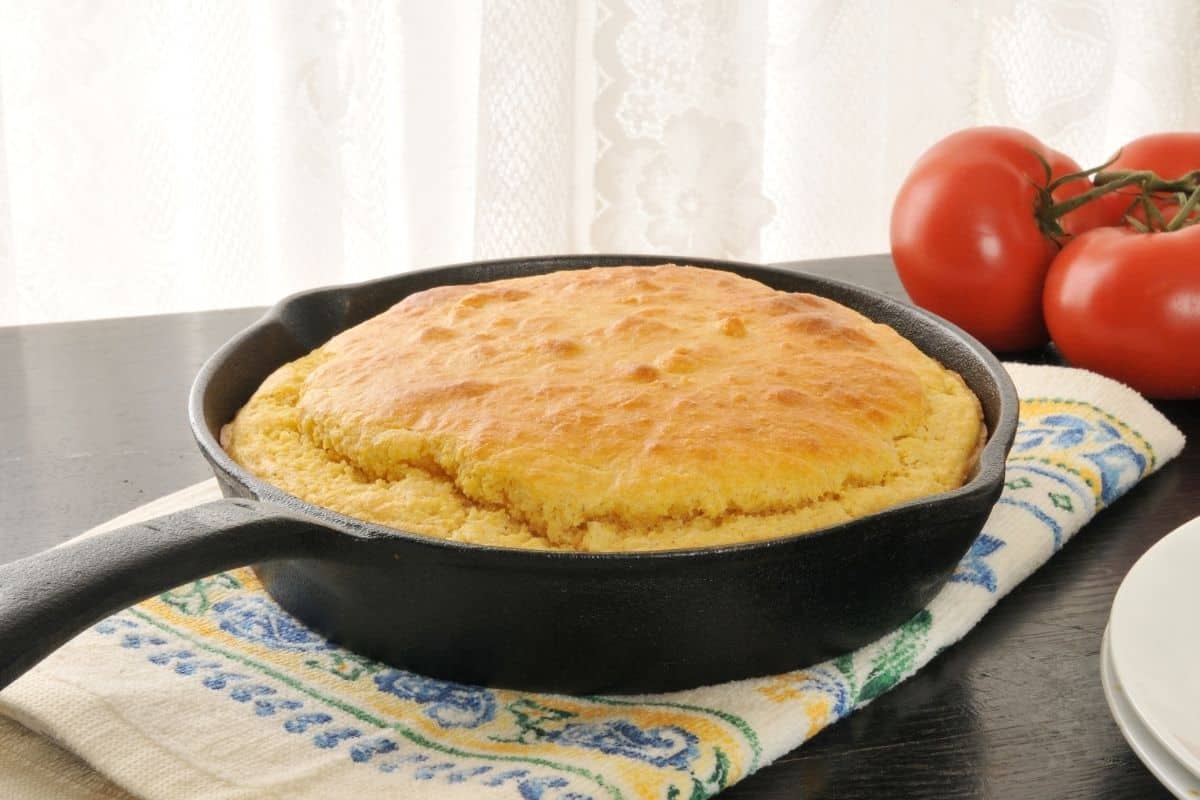 When you pull a fresh pan of cornbread out of the oven, your dog probably inhales the air in ecstasy. This golden, spongey, American staple food has a buttery aroma that’s sure to get a canine’s attention. It’s tempting to want to share a piece with your furry friend—but is it safe for dogs to eat cornbread?

Healthy dogs can eat cornbread in moderation. This buttery bread is high in calories, fat, and carbohydrates, so it shouldn’t form a staple in your dog’s diet. In addition, cornbread and corn muffins contain ingredients that may trigger allergies. Pets with food sensitivities should avoid cornbread.

Your dog is likely interested in indulging in the buttery flavor of cornbread. Read on to learn more about cornbread ingredients and whether this bread is safe for your dog.

What Ingredients Are in Cornbread?

Whether or not cornbread is suitable for dogs depends on the ingredients.

In the United States, cornbread recipes differ by region. In the north, recipes call for yellow cornmeal and often incorporate sugar, milk, and flour. Southern cornbread, however, typically uses white cornmeal and buttermilk.

Some recipes call for bacon drippings to create a golden-brown crust, while most southern recipes omit flour and sugar.

There’s a great debate regarding sugar in cornbread. While the northerners say yes, sugar belongs in the recipe, the southerners disagree. In any case, cornbread without sugar is likely better for a dog versus a recipe that includes it.

Below, we’ll cover the common ingredients found in both versions of cornbread and discuss whether they’re safe for dogs to consume.

Wheat is a grain and the main ingredient in flour.

Flour is found most often in northern cornbread recipes to give the cornbread a cake-like texture. In moderation, flour is unlikely to cause problems. However, it may cause food allergies in sensitive dogs.

The American Kennel Club lists wheat as one of the top five potential food allergens in dogs.

Both white and yellow cornmeal is made from milled corn, but white corn tends to be finer than yellow. Cornmeal is what gives cornbread its signature grainy texture.

Yellow cornmeal is where northern cornbread gets its beautiful golden interior, while southern corn tends to be paler in color on the inside. Both types of cornbread are usually golden on the outside, thanks to a crust browned with fat, which is usually butter or bacon drippings.

Cornmeal often gets a bad reputation when it comes to dog food, but it’s generally considered safe for dogs. However, corn (and other grains, including wheat) may contain storage mites, a potential allergy trigger.

In the northern states, cornbread recipes often include sugar. This sweetener balances out the corn and bread flavors, giving the cornbread a sweeter, more cake-like taste.

Dogs need natural sugar in the form of carbohydrates. Natural sugars (fructose) from fruits are generally safe, but some fruits are toxic to dogs. While it’s okay for a dog to enjoy small amounts of sugar in moderation, excess sugar causes an unhealthy spike in blood glucose levels.

For dogs with blood glucose issues, refined sugar should be avoided.

Salt brings out the complexity of flavors in cornbread, allowing you to differentiate between ingredients with each bite.

Excess salt in a dog’s diet can lead to vomiting, diarrhea, and excessive thirst. Too much salt can cause more severe complications, including seizures, but a small amount of salt, such as that found in cornbread, is generally considered safe.

Baking powder used in cornbread recipes allows the bread to rise as it heats up in the oven. This baking ingredient contains baking soda, cream of tartar, and sometimes cornstarch. Dogs should not eat baking powder by itself, of course, but since cornbread uses so little of it, spread out throughout the entire recipe, a bit of cornbread should be safe for your dog.

Baking soda can be toxic to dogs if they consume large quantities. In cornbread, recipes call for only a small amount of baking soda, and in small amounts, this ingredient is generally harmless to dogs. Plus, it is spread throughout the entire recipe, so like baking powder, your dog should be safe with a small cornbread serving.

Nearly two decades later, veterinarians from the same organization reported similar symptoms in dogs exposed to cream of tartar (potassium bitartrate). Grapes and raisins are high in tartaric acid, and it’s the same compound used in cream of tartar.

While small amounts of cream of tartar, such as the amount used in baking, aren’t considered dangerous to dogs, large quantities could be potentially fatal.

Like cornmeal, cornstarch is also derived from corn. Interestingly, cornstarch seems to be less allergenic than cornmeal. Therefore, cornstarch as a carbohydrate source is better for dogs and cats suffering from corn allergies.

Butter in cornbread makes the bread moist, flaky, rich, and, of course, buttery.

Butter is made from milk, and dairy products aren’t generally recommended for dogs, as they can cause flatulence, stomach upset, and other gastrointestinal issues. Dairy might be the cause of some canine allergies.

In addition, butter is saturated fat and offers little to no health benefits for canines.

Related Articles:
Can You Add Butter to Dog Food?

In cornbread, eggs act as a binder to hold everything together and as a leavening agent to help the bread rise.

Buttermilk is more acidic than regular milk, and more acid may prevent the bread from rising, so baking soda is substituted for baking powder. As mentioned earlier, baking soda is considered harmless to dogs in small amounts.

Additionally, buttermilk is lower in lactose than regular milk. It also contains bacteria that could aid in the digestion of lactose.

Bacon grease is fatty and salty, so it’s not recommended for dogs. However, if a dog consumes a small amount of bacon drippings, it’s not a big deal. Too much bacon grease, however, puts your dog at an increased risk for pancreatitis.

Is Cornbread Harmful to Dogs?

Homemade cornbread is recommended over store-bought boxed mixes, because making cornbread at home puts you in control of the ingredients. To make a healthier version of cornbread for your dog, consider omitting flour, sugar, and salt. In addition, opt for buttermilk and baking soda instead of regular milk and baking powder.

A small amount of cornbread is not harmful to dogs and is unlikely to cause any adverse health effects. It shouldn’t be fed to dogs often due to the high-fat content and potentially allergenic ingredients. Dogs with food sensitivities should avoid cornbread and other table foods.

For dogs with allergies to corn or storage mites, cornbread may cause allergy symptoms. Even after cooking cornbread at high temperatures, mite carcasses are still present and may cause rhinitis (stuffy nose) or pruritis (itchy skin).

Is cornbread nutritionally valuable to a dog? Cornbread contains fiber, calcium, iron, and potassium, so there’s some nutritional value, although not enough to be a primary food source for your canine. 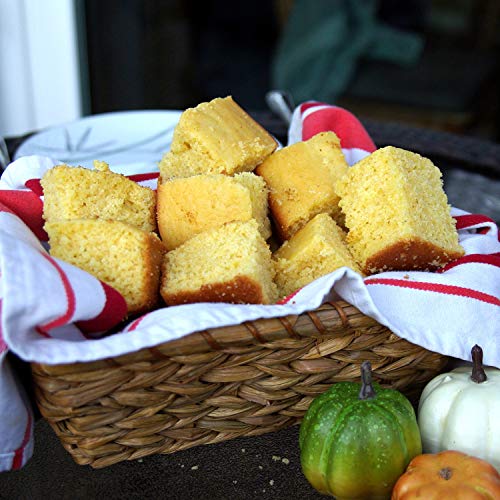 In a three-ounce (85.05 g) piece of cornbread, there are approximately (nutrition facts vary based on the recipe):

Cornbread is a calorie-dense, high-carbohydrate, high-fat food. To reduce the caloric intake when your dog consumes cornbread, consider feeding him a smaller piece.

Corn as a whole grain is not easily digestible. Refined corn, such as cornmeal, is much easier for dogs to digest, as it’s milled into a finer grain. In essence, the way corn is processed affects its digestibility. Cornmeal is much easier to digest than whole kernel corn.

Can My Dog Eat Corn Muffin?

Corn muffins are safe for dogs in moderation. Your dog probably shouldn’t eat a whole muffin, but a few small pieces are unlikely to cause any problems.

Moderation is key when it comes to feeding a dog cornbread or corn muffins.

Dogs should only consume cornbread in small amounts on occasion.

This cornmeal-based bread should never make up a primary portion of your dog’s diet. It’s high in both calories and fat and could lead to complications such as weight gain and pancreatitis. The amount of cornbread you offer your dog as a treat depends on the size of the dog.

For example, a large-breed dog can eat a larger amount of cornbread compared to a toy breed.

Now that you know more about cornbread, you can share it with your furry friend in moderation. While cornbread is not highly nutritious for dogs, it’s still tasty, and the occasional snack won’t harm them.

It’s highly recommended that you make cornbread at home from scratch to ensure that it’s as healthy as possible for your canine. Omitting sugar, salt, and flour and opting for buttermilk instead of whole milk are simple ways to reduce potential allergen exposure, sugar, and lactose content.