Rice Krispie Treats is one of the delicious ready-to-eat snacks that has, over the years, evolved into a human favorite. While these treats are tasty for humans, are they ideal for canines too?

Dog’s shouldn’t eat Rice Krispie Treats because they come packed with loads of sugar, salt, fillers, and artificial flavorings that can be problematic to dogs if consumed in large amounts. Therefore, you should limit your dog’s Rice Krispie Treat intake or refrain from feeding them altogether.

To help you unravel the mystery surrounding dogs and Rice Krispie Treats, I’ve compiled this guide offering a detailed look into whether dogs should eat these treats. Keep reading!

Are Rice Krispie Treats Safe for Your Dog?

Plain Rice Krispie Treats are safe for your dog in small amounts. They aren’t the ideal snack, but sharing a small bite with your canine likely won’t cause any adverse effects. However, dogs shouldn’t eat Rice Krispie Treats often or in large amounts, as they could have long-term negative effects.

Typically, Rice Krispie cereal is the primary ingredient in these treats, followed by a significant amount of marshmallows. These two ingredients won’t do much damage to your dog’s health, if he only consumes a tiny bite ever so often. 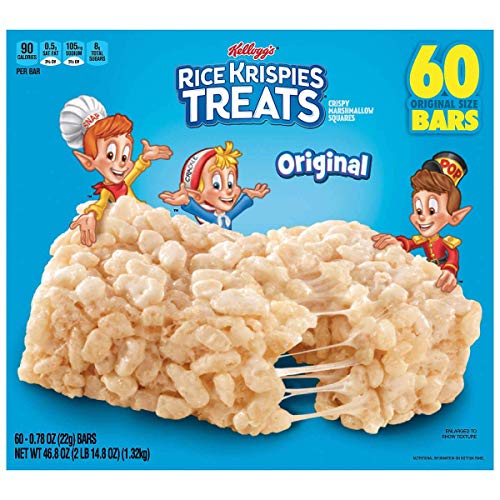 Besides these two main ingredients, some Rice Krispie Treats variations also contain sprinkles and artificial flavorings like caramel, butter, and peanut butter, to mention a few. You are likely to find other brands covered in chocolate, which is known to be highly toxic for dogs.

Adding on to these ingredients are loads of sugar, artificial fillers, and food colorings. Therefore, after a look at Rice Krispie Treats’ chain of ingredients, it’s clear that they aren’t a reliable go-to treat for dogs and most of their ingredients are known for being problematic.

With that in mind, let’s take a look at how Rice Krispies are manufactured.

How Are Rice Krispie Treats Made?

Rice Krispie Treats are made by mixing melted butter, Rice Krispie cereal, and marshmallows together to form squares. Many recipes also add flavorings like caramel, peanut butter, chocolate, or sprinkles.

While most dogs are active and may easily break down these calories, major concern crops in from dog parents with lazy or elderly dogs that can’t entirely break down all the calories they consume. So, it’s important to limit the intake of these treats as much as you can.

On top of the basic ingredients in Rice Krispie Treats, there are also numerous additives and preservatives that weren’t designed for a dog’s consumption.

Let’s take a look at some of these ingredients and discuss their effects on dogs’ health.

Outrightly, sugar isn’t toxic to dogs, but a large intake can have adverse effects on your dog’s long-term wellbeing. By allowing your dog to consume a large amount of Rice Krispie Treats, you could be exposing him to a high concentration of sugar added during the formulation process.

Salt is another controversial ingredient found in Rice Krispie Treats. Excess salt consumption can trigger reactions in your dog and cause salt poisoning, noticeable through symptoms such as dehydration, stomach upset, frequent urination, blood pressure, and, in extreme cases, kidney failure.

We’ve said that the primary ingredient in Rice Krispie Treats is Rice Krispie cereal. Although these cereals are made from rice, which is naturally gluten-free, some versions contain malt-barley syrup which is used as a flavor enhancement. Unfortunately, this flavoring carries a significant amount of gluten that can trigger allergic reactions in pups with gluten intolerance.

This can cause several undesirable reactions with symptoms that include pale coat, stomach inflammation, diarrhea, and general ill-health.

So, if your dog is gluten intolerant and you still want him to have a taste of these treats, you can go for the gluten-free or non-malted options.

Rice Krispie Treats contain a significant amount of marshmallows as the second main ingredient after the Rice Krispie cereal.

Although marshmallows are safe for dogs to consume in moderate amounts, some brands may contain xylitol, an artificial sweetener used in the food industry. Xylitol is toxic to dogs and causes a drop in blood sugar level, seizures, and, in extreme cases, liver damage.

Even if the marshmallow cream is free of xylitol, it still contains lots of sugar and calories that aren’t good for your dog either.

Additionally, too much marshmallow cream on the Rice Krispie Treats can trigger vomiting, gastrointestinal issues, and, far worse, pancreatitis.

Most Rice Krispie cereals used in making these treats also contain Tetrasodium Pyrophosphate, a chemical preservative added to give them a long shelf life. Unfortunately, this preservative is believed to trigger aging, cause damage to the blood vessels, and put a dog at risk of renal disease.

Therefore, it’s important to counter-check the ingredient list of the rice cereal you are using to prepare the treats. In most cases, store-bought Rice Krispie Treats are packed with this preservative.

BHT is another chemical compound added to Rice Krispie cereal as a preservative. This worrying compound is linked to liver and kidney damage and is also believed to be carcinogenic. This further emphasizes why Rice Krispie Treats (made from rice Krispie cereal containing BHT) aren’t a safe snack for your canine friend.

Like with most other dog treats, an excess of Rice Krispie Treats is likely to trigger undesirable reactions such as:

What To Do If Your Dog Accidentally Eats Them

If your dog accidentally eats Rice Krispie Treats when he shouldn’t have, you should monitor his reactions for the next few hours. If he shows signs of discomfort, illness, or pain, consult with your vet for further assistance.

Depending on the severity of the symptoms, which range from upset stomach, diarrhea, loss of appetite, and vomiting, your vet will advise on the necessary course of action.

Do Rice Krispie Treats Have Any Nutritional Value?

Rice Krispie Treats do have some nutritional value and contain some essential vitamins and minerals, such as vitamin A and potassium. However, they don’t qualify as a full meal replacement for your dog and lack the nutritional balance needed to keep him healthy and energized throughout the day.

Therefore, they are best served only as occasional treats.

Here are some frequently asked questions regarding the consumption of Rice Krispie Treats by dogs:

If your dog eats more of this treat and suffers from constipation, you can give him laxatives or stool softeners, and increase his fluid intake. You can also opt for brown Rice Krispie Treats because this type of rice contains a significant amount of fiber that aids digestion.

However, to prevent constipation in your furry canine friend, it’s advisable to limit your pup’s intake of Rice Krispie Treats.

Rice Krispie Treats have their share of healthy and unhealthy benefits. They are healthy because they contain a substantial amount of carbohydrates, vitamins, and minerals needed for the growth and general well-being of your pup.

Rice Krispie Treats are unhealthy for dogs due to their concentration of sugar, salt, and artificial flavorings. A small bite won’t necessarily be unhealthy for your dog, but eating them regularly won’t offer any health benefits, either.

So, to derive more from the positive side, don’t allow your dog to have a huge intake of these treats in a single sitting.

Most people are fond of eating cereal treats with milk. Although this combo works well for humans, it isn’t the best for your canine companion.

Dogs shouldn’t eat Rice Krispie Treats with milk because most canines are lactose intolerant, meaning they lack enough lactase to break down the lactose in milk. This leads to incomplete digestion of milk and other dairy products, resulting in mild stomach upsets.

Rice Krispie Treats are bad for dogs when consumed regularly and in large amounts. They contain a list of problematic ingredients that dog’s aren’t supposed to eat often, including sugar, artificial fillers, and flavorings, all of which can interfere with your dog’s digestive system.

Instead, if you have a diabetic pup, you can go for brown Rice Krispie Treats.

Anytime you think of sharing Rice Krispie Treats with your pup, be wary of the high level of salt, sugar, marshmallow, and other artificial flavorings and colorings employed in its formulation.

If your dog consumes more of this treat and you notice symptoms such as constipation, diarrhea, vomiting, and loss of appetite, consult a vet immediately.

My name is Andrew, and I've been around dogs my entire life. Look at my profile picture and, you see me as a little kid with my family's two German Shepherds. That's how my life with dogs started, and ever since, I've been both living and working with dogs.

link to Can Dogs Drink Distilled Water? Let’s Find Out

Every pet owner knows dogs need to have a steady water supply, but deciding what type of water to give your dog can be a challenge. There are many options, and there are numerous contrasting claims...

Continue Reading
link to How Long Can Dogs Go Without Water? (We Ask the Experts)

Like humans, dogs' bodies are made of around 80% water. To maintain this healthy balance, dogs need to drink plenty of fresh, clean water throughout the day. Without water, dogs could experience...

We are very passionate about Dogs and love sharing everything we learn about them. Mr. Dog Food is the perfect resource for learning everything about your dog's nutritional needs.

This site is a participant in the Amazon Services LLC Associates Program, an affiliate advertising program designed to provide a means for sites to earn advertising fees by advertising and linking to Amazon.com. We are compensated for referring traffic and business to Amazon and other companies linked to on this site.